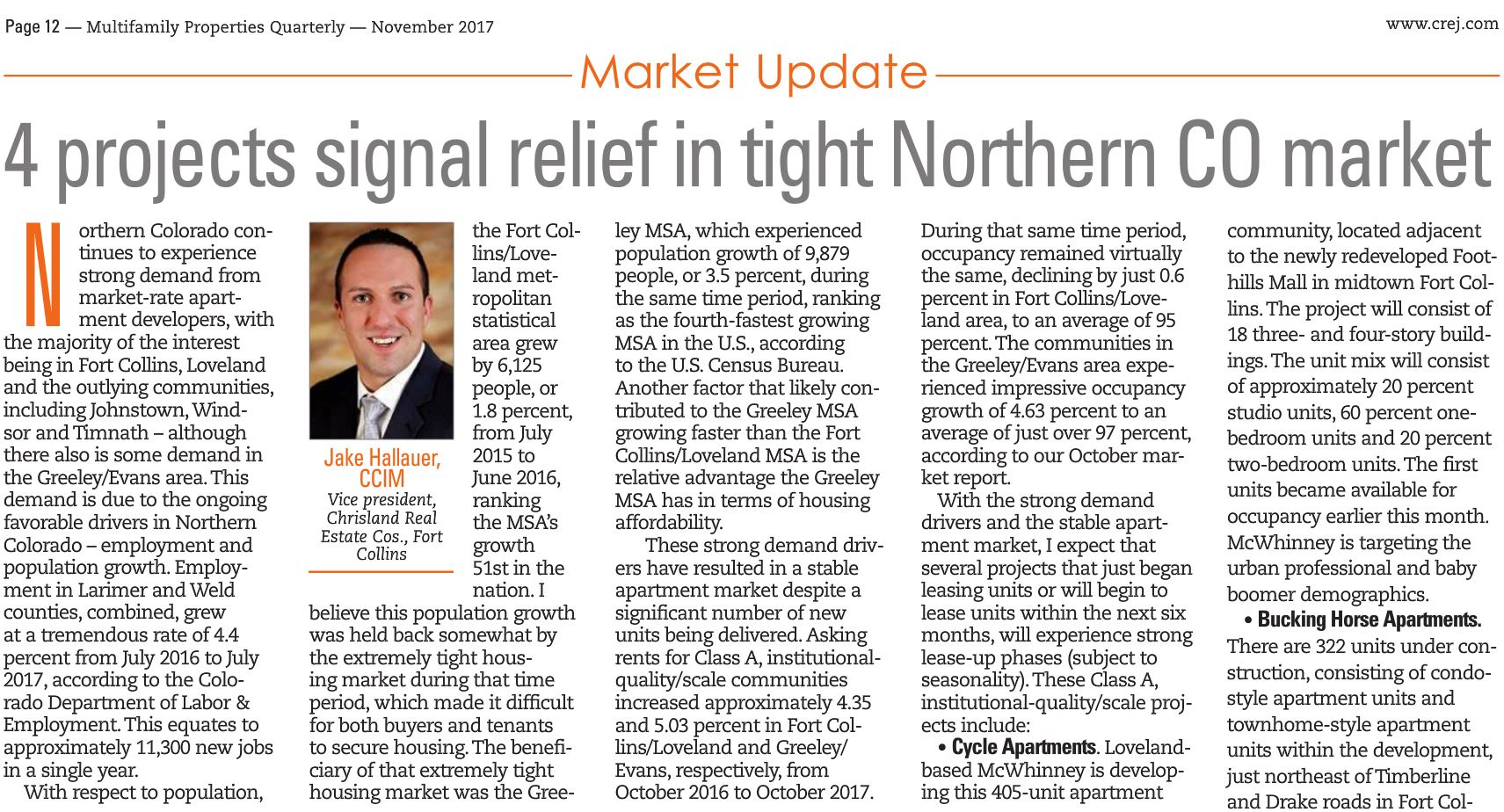 Northern Colorado continues to experience strong demand from market-rate apartment developers, with the majority of the interest being in Fort Collins, Loveland and the outlying communities, including Johnstown,Windsor and Timnath – although there also is some demand in the Greeley/Evans area. This demand is due to the ongoing favorable drivers in Northern Colorado – employment and population growth. Employment in Larimer and Weld counties, combined, grew at a tremendous rate of 4.4 percent from July 2016 to July 2017, according to the Colorado Department of Labor & Employment.This equates to approximately 11,300 new jobs in a single year.

With respect to population, the Fort Collins/Loveland metropolitan statistical area grew by 6,125 people, or 1.8 percent, from July 2015 to June 2016, ranking the MSA’s growth 51st in the nation. I believe this population growth was held back somewhat by the extremely tight housing market during that time period, which made it difficult for both buyers and tenants to secure housing. The beneficiary of that extremely tight housing market was the Greeley MSA, which experienced population growth of 9,879 people, or 3.5 percent, during the same time period, ranking as the fourth-fastest growing MSA in the U.S., according to the U.S. Census Bureau. Another factor that likely contributed to the Greeley MSA growing faster than the Fort Collins/Loveland MSA is the relative advantage the Greeley MSA has in terms of housing affordability.

These strong demand drivers have resulted in a stable apartment market despite a significant number of new units being delivered. Asking rents for Class A, institutional quality/scale communities increased approximately 4.35 and 5.03 percent in Fort Collins/Loveland and Greeley/ Evans, respectively, from October 2016 to October 2017. During that same time period, occupancy remained virtually the same, declining by just 0.6 percent in Fort Collins/Loveland area, to an average of 95 percent. The communities in the Greeley/Evans area experienced impressive occupancy growth of 4.63 percent to an average of just over 97 percent, according to our October market report.

With the strong demand drivers and the stable apartment market, I expect that several projects that just began leasing units or will begin to lease units within the next six months, will experience strong lease-up phases (subject to seasonality). These Class A, institutional-quality/scale projects include:

With the continued population and employment growth Northern Colorado is experiencing, additional apartment development should continue and the apartment developers should enjoy strong performance of their projects for the next several years.