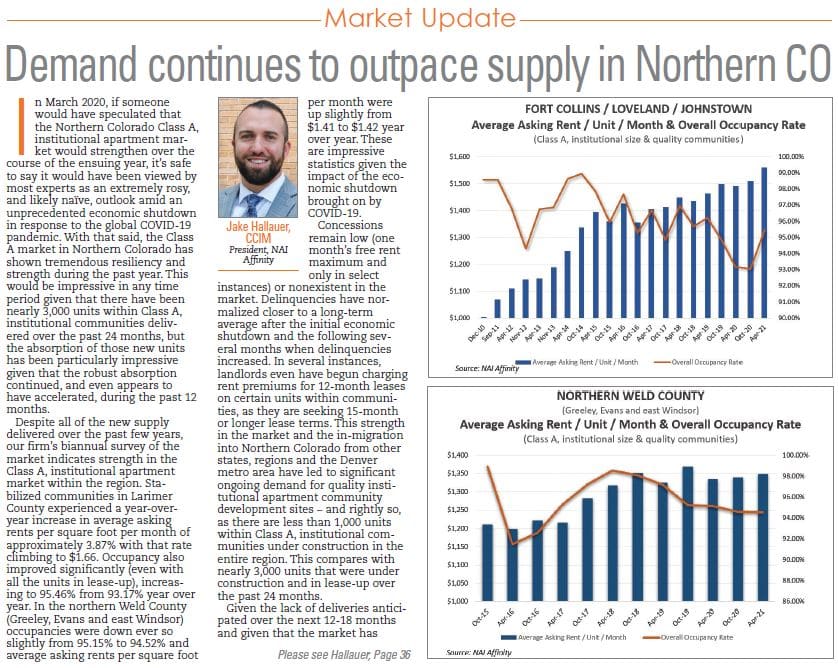 In March of 2020, if someone would have speculated that the northern Colorado Class A, institutional apartment market would strengthen over the course of the ensuing year, I think it’s safe to say that would have been viewed by most experts as an extremely rosy, and likely naïve, outlook amidst an unprecedent economic shutdown in response to the global COVID-19 pandemic.  With that said, the Class A market in northern Colorado has shown tremendous resiliency, and even strength, during the past year.  This resilience and strength would be impressive in any time period given that there have been nearly 3,000 units within Class A, institutional communities delivered over the past approximately 24 months, but the absorption of those new units has been particularly impressive given that the robust absorption continued, and even appears to have accelerated, during the past 12 months.

Despite all of the new supply delivered over the past few years, NAI Affinity’s bi-annual survey of the market indicates strength in the Class A, institutional apartment market within the region.  Stabilized communities in Larimer County experienced a year-over-year increase in average asking rents, per square foot, per month, of approximately 4.58% with that rate climbing to $1.66.  Occupancy also improved significantly (even with all the units in lease-up), increasing to 95.46% from 93.17% year-over-year.  In the northern Weld County (Greeley, Evans & east Windsor) area, occupancies were down ever so slightly from 95.15% to 94.52% and average asking rents, per square foot, per month, were up slightly from $1.41 to $1.42 year-over-year.  These are impressive statistics given the impact of the economic shutdown brought on by COVID-19.

Concessions remain low (one month’s free rent maximum and only in select instances), or non-existent in the market.  Delinquencies have normalized closer to a long-term average after the initial economic shutdown and the following several months when delinquencies increased.  In several instances, landlords have even begun charging rent premiums for twelve-month leases on certain units within their communities, as they are seeking fifteen months, or longer, lease terms.  This strength in the market and the in-migration into northern Colorado from other states, regions and even from the Denver Metro area, has led to significant ongoing demand for quality institutional apartment community development sites, and rightly so, as there are less than 1,000 units within Class A, institutional communities currently under construction in the entire region.  This as compared to nearly 3,000 units that were under construction and in lease-up over the past 24 months.

Given the lack of deliveries anticipated over the next 12-18 months and given that the market has absorbed somewhere between 1,400-1,500 units annually in Class A, institutional communities over the past few years, I anticipate that the demand for new units will likely significantly outpace deliveries of new units over the next 12-18 months which should likely result in additional rent growth, further increases in occupancy and strong performance of Class A, institutional communities in the region.  Additionally, as northern Colorado appears to be one of the regions which has benefited from in-migration due to the prevalence of organizations allowing employees to work remotely, in some cases indefinitely, I expect that the in-migration into the region, and resulting robust demand for additional housing units, will continue for the foreseeable future.

The strong market fundamentals coupled with cap rate compression and strong investment demand for Class A, institutional assets in the region, has created quite an opportune time for potential sellers of these types of assets.  The recent sales of The Wyatt, a 368-unit garden style community in south Fort Collins for approximately $299,000 per unit, and of Rise, a 236-unit four-story, surface parked, elevator served community which sold for nearly $298,000 per unit are the two highest per unit sales in the market in history.  Cap rates have compressed by approximately 100 basis points on the best assets over the last five years, with market cap rates in the low 4% range for the best Class A, institutional assets.  With strong occupancy, rental rates and low cap rates, now is an excellent time to consider selling an asset in the region.

Ongoing challenges holding developers back from delivering more apartment units include: sourcing quality development sites in municipalities/districts with cost-feasible impact fees and favorable raw water situations, longer entitlement and construction timelines and tighter lending restrictions.  Despite some hope from the development community that one positive impact of COVID-19 may be a flattening, or perhaps even reduction, in construction costs, that has not been the case thus far, as the costs for lumber and steel has skyrocketed over the past year.  Some municipalities have also raised their cash in-lieu of raw water fees and/or other impact fees, which exacerbates the challenges related to new attainable or affordable housing.

Additionally, the potential for mortgage rates to rise over the next 24 months, the lack of vacant developed lot supply for new single-family homes, the costs to deliver new homes (many of which were mentioned above and also apply to single family development) and the ongoing lack of significant condo development are all factors which likely indicate strong future demand for apartment units in the region.  There are likely to be a number of would-be homebuyers over the next 24 months who either cannot afford to purchase a home, who are not willing to stretch their budget to purchase a home, or who have lost income necessary to qualify for a mortgage loan, that will remain renters for the foreseeable future.

While it is hard to predict the economic impacts of the ongoing effects of COVID-19 and the unprecedented amount of stimulus pumped into the monetary system, and the resulting hardships many businesses have faced or will face, the northern Colorado Class A, institutional apartment market remains very strong.  With the relatively low number of deliveries anticipated in the next 12-18 months, I believe this strength will prevail in the market for years to come.