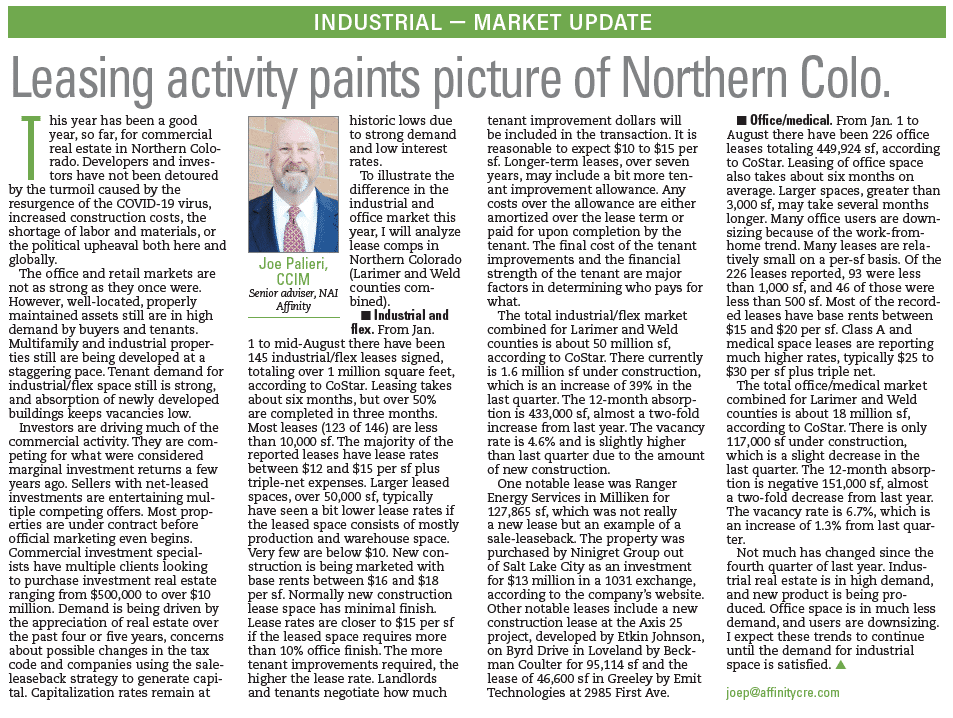 2021 has been a good year, so far, for commercial real estate in Northern Colorado. Developers and Investors have not been detoured by the turmoil caused by the resurgence of the Covid-19 Virus, increased construction costs, the shortage of labor and materials, or the political upheaval both here and globally.

The office and retail markets are not as strong as they once were. However, well located, properly maintained assets are still in high demand by buyers and tenants. Multi-Family and Industrial properties are still being developed at a staggering pace. Tenant demand for Industrial/Flex space is still strong and absorption of newly developed buildings keeps vacancies low.

Investors are driving much of the commercial activity. They are competing for what were considered marginal investment returns a few years ago. Sellers with net leased investments are entertaining multiple competing offers. Most properties are under contract before official marketing even begins. Commercial investment specialists have multiple clients looking to purchase investment real estate ranging from $500,000 to over $10,000,000. Demand is being driven by the appreciation of real estate over the past 4- 5 years, concerns about possible changes in the tax code and companies using the sale-leaseback strategy to generate capital. Capitalization Rates remain at historic lows due to strong demand and low interest rates.

To illustrate the difference in the Industrial and office market this year I will analyze lease comps in Northern Colorado (Larimer & Weld counties combined).

From January 1 to the present there have been 145 Industrial/Flex leases totaling 1,021,499 square feet, according to CoStar. Leasing takes about six months but over 50% are completed in three. Most leases (123 of 146) are less than 10,000 square feet. The majority of the reported leases have lease rates between $12 and $15 per square foot, plus triple net expenses. Larger leased spaces over 50,000 square feet typically have a bit lower lease rates if the leased space consists of mostly production and warehouse space. Very few are below $10. New construction is being marketed with base rents between $16 – $18 per square foot.

The total Industrial/Flex market combined for Larimer and Weld Counties is about 50 million square feet according to CoStar. There are currently 1.6 million square feet under construction which is an increase of 39% in the last quarter. The 12-month absorption is 433,000 square feet, almost a two-fold increase from last year. The vacancy rate is 4.6% and is slightly higher than last quarter due to the amount of new construction.

Notable leases are Ranger Energy Services in Milliken of 127,865 square feet. This was not really a new lease but an example of a Sale/Leaseback. The property was purchased by Ninigret Group out of Salt Lake City as an investment for $13,000,000 in a 1031 exchange according to the company’s website. A New Construction lease at the Axis 25 project developed by Etkin Johnson on Byrd Drive in Loveland by Beckman Coulter of 95,114 square feet and finally the lease of 46,600 square feet in Greeley by Emit Technologies at 2985 1st Avenue.

From January 1 to the present there have been 226 office leases totaling 449,924 square feet, according to CoStar. Leasing of office space also takes about six months on average.  Larger spaces, greater than 3,000 square feet may take several months longer. Many office users are downsizing because of the work from home trend. Many leases are relatively small, on a per square foot basis. 93 of the 226 leases reported were less than 1,000 square feet. 46 of those were less than 500 square feet. Most of the recorded leases have base rents between $15 – $20 per square foot. Class A and Medical space lease at much higher rates, typically $25 to $30 per square foot plus triple nets.

Not much has changed since the fourth quarter of last year. Industrial real estate is in high demand and new product is being produced. Office space is in much less demand and users are downsizing I expect these trends to continue until the demand for industrial space is satisfied.